WHO IS MAJ JAMES CAPERS JR.?

WHO IS MAJ JAMES CAPERS JR.?

Thank you, Team UAP, for your dedication and support to our Nation's Warriors.  Without your patriotism and support, Warriors such as 1LT Clint Lorance, would not have received the recognition they deserve.  Today, you need to hear about another Warrior, USMC Maj James Capers Jr., a Marine Force Reconnaissance, Vietnam Combat Veteran, and Hero! Maj Capers was recommended for the Congressional Medal of Honor for his Heroic actions in Vietnam. Despite strong endorsements from two Generals and several of the men Capers served with, the recommendation was downgraded two levels at the Pentagon. UAP is honored to draw Presidential, Congressional, and Public attention to this Hero. Please help us get Maj Capers the recognition he deserves!

Please sign the Presidential Petition to award Maj Capers the Medal of Honor!

Maj Capers was born on August 25, 1937, in South Carolina to a family of sharecroppers during the Jim Crow era. He later moved to Baltimore where he would meet the love of his life and future wife Dottie and decide to enlist in the Marines.  This would be the start of a legendary career that overcame obstacles and broke barriers on and off the battlefield as one of the greatest Marines to ever serve.

While serving, he would be selected to join the elite Force Recon Marine unit where he excelled, breaking training records, participating in 64 long-range reconnaissance patrols, and five major campaigns in Vietnam. He was a natural leader and father figure to Team Broadminded, a specialized group of Force Recon Marines.  Capers & Team Broadminded were routinely selected to go on the most dangerous and clandestine missions in Vietnam.

Missions included a POW rescue ordered by President Johnson, amphibious assaults in the DMZ, recovery of a B-57 rumored to have a nuclear bomb, and search and destroy patrols in Phu Loc. 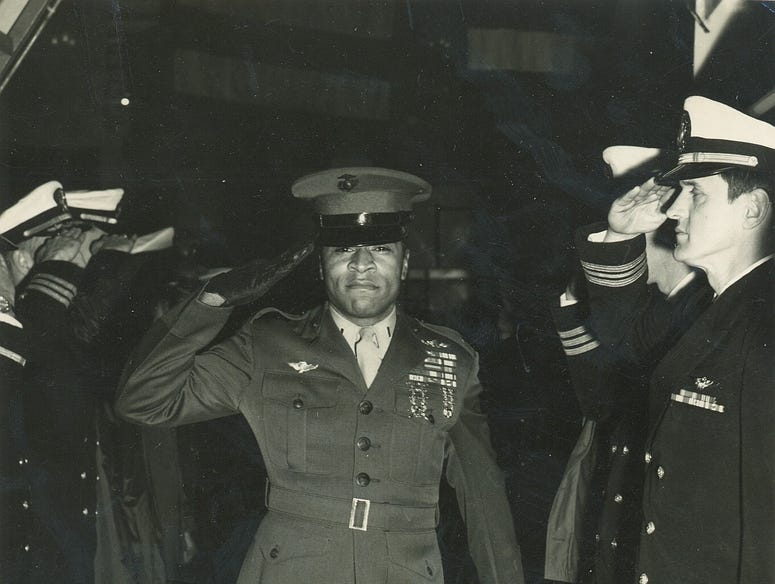 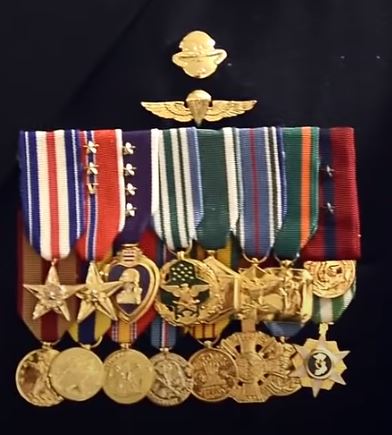 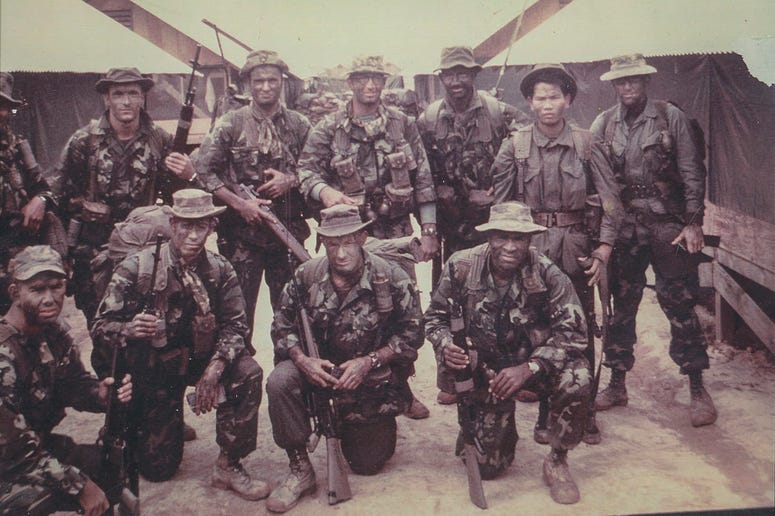 A soft-spoken man, his commendations offer an inspiring view of his heroism and self-sacrifice.  Nominated for the Medal of Honor, he has been awarded the Silver Star, two Bronze Stars, and Combat V, three Purple Hearts, Vietnam Cross of Gallantry, a Joint Service Commendation Medal, Combat Action Ribbon, three Good Conduct Ribbons, Battle Stars, Navy Commendation Medal, Navy Achievement Medal, CG Certificate of Merit, multiple letters of Merit, Appreciation, and Commendation.     As an African American, his achievements included being the first African American to command a Marine Recon company and the first enlisted African American Marine Officer to receive a battlefield commission. In the fall of 1967, still recovering from combat injuries, Major James Capers was selected to represent the U.S. Marines in a national recruiting campaign.  With full integration completed only in 1960, Capers’ image became the Marine Corps' most popular recruitment campaign.  Following Vietnam, Capers participated in many Cold War covert operations as a field agent in Eastern Europe and Africa. Details of these operations remain classified today.   His wife Dottie and son Gary passed away in 2003 and were buried in Arlington National Cemetery.  Capers celebrated his 50th anniversary with Dottie one week before her passing.  In 2010, Major James Capers Jr. was one of only 14 members inducted into the inaugural class of U.S. Special Operations Command's Commando Hall of Honor at a ceremony in front of USSOCOM headquarters at MacDill Air Force Base.  Major Capers Jr. is recognized as a pioneer in Recon training tactics which are still used by Special Operations forces around the world.   He and the surviving members of Team Broadminded meet annually to celebrate and honor those who have passed.

Capers currently resides in North Carolina and continues to be part of the special operations community.

In 2008, Major Capers was recommended for the Congressional Medal of Honor for his actions in Vietnam 41 years earlier.

Despite strong endorsements from two Generals and several of the men, Capers served with, the recommendation was downgraded two levels at the Pentagon.

No explanation was ever given.

For his actions as a patrol leader during a reconnaissance mission in which his team, codenamed “Broadminded,” supported Company M, 3rd Battalion, 26th Marine Regiment, during a search and destroy mission against a suspected regimental-sized enemy force.

Team Broadminded engaged the enemy seven times during their mission, which took place March 31 to April 3, 1967, in the vicinity of Phu Lac, Vietnam. On the final day, a larger enemy force ambushed the nine-man patrol with small-arms fire and several claymore mines. The team was immediately pinned down, and every member was wounded - most of them severely.

Capers, a second lieutenant then, took more than a dozen pieces of shrapnel to his legs and abdomen. Despite his wounds, Capers directed his team to lay down suppressive fire to gain fire superiority and set up a hasty defense. He called for mortar and artillery strikes against the enemy, directed the treatment of the wounded, and called for the team’s evacuation, ensuring all his men made it out alive.

Yerman, a sergeant in Vietnam, served as Capers’ platoon sergeant, assistant patrol leader, and radio operator during the roughly 11 months they served together stated “He was always the last man on the chopper. I was the second to last man. I’d get aboard and I’d nod. If I didn’t nod, he’d know that all the men weren’t there, and we wouldn’t leave.”

From Stars and Stripes (Read article here) “If I was going to die there in Vietnam, I was going to die fighting,” said Capers, a retired major whose 22 years in the Corps would earn him fame as a revered and innovative fighter and one of the Marines’ first black special operators. “That was just the way we fought. You go out fighting. You kill as many enemy as you could — and that would mean that they could not further fight your guys or other American troops.” It was April 1967, after three days of patrolling behind enemy lines in search of a reported North Vietnamese encampment near the village of Phu Loc just north of Hue city, when Capers’ nine-man Third Force Recon Team — known as Team Broadminded — found itself in the crosshairs of an entire NVA regiment. The fighting was as intense as any he had seen in nearly a year in Vietnam spent conducting dozens of commando raids in northern South Vietnam, Capers recalled. With two broken legs and peppered with shrapnel from the blast of a Claymore mine, Capers battled a mental haze brought on by massive blood loss and a shot of morphine as he fought to free his men from the assault. With his entire team wounded and their loyal service dog, King, killed in action, Capers ordered his Marines to evacuate on a small H-34 chopper. He continued the fight — calling in strikes on “danger close” enemy positions as he fended off the attackers with his M-16. But the extraction helicopter was overloaded, and his men needed critical medical attention. Capers made the impossible decision — let the chopper take his men and King’s body away from danger while he stayed behind to face certain death. “I figured it’s better to lose one man than to lose the whole team,” Capers, 80, told Stars and Stripes in a recent telephone interview from his home near Camp Lejeune in Jacksonville, N.C. “Any commander worth his salt would care for his men before his self.” But the men would not leave their leader behind. Capers — who would become the first black Marine officer nominated for the Medal of Honor for his actions that day, but would instead receive the Silver Star — was pulled aboard the chopper. After two failed attempts at liftoff, the pilots finally got the H-34 airborne, carrying the men to safety and beginning Capers’ journey toward recovery. He would later become the face of the Corps’ first recruiting campaign targeting young black men.

Mother of Special Operations Medic speaks out about UNC injustice